CIPS researchers and faculty are integrally involved in several spacecraft missions: from space based telescopes locating extrasolar planets to orbiters studying the atmospheres and interiors of planets in our own solar system. CIPS researchers are also involved in developing instruments for the next generation of space missions.

SIM PlanetQuest, scheduled for launch within the next decade, will be the most powerful planet-hunting space telescope ever devised. Using two separated mirrors and combining their light with a technique known as interferometry, SIM PlanetQuest will able to detect planets as small as Earth. These are the kind of planets that scientists believe have the most potential to support life.

Although more than 160 planets have been discovered beyond our solar system since 1995, the “holy grail” – Earth-like planets located in the habitable zone – remains beyond the reach of current telescopes.

The Kepler Mission, a NASA Discovery mission, is specifically designed to survey our region of the Milky Way galaxy to detect and characterize hundreds of Earth-size and smaller planets in or near the habitable zone. The habitable zone encompasses the distances from a star where liquid water can exist on a planet’s surface. Results from this mission will allow us to place our solar system within the continuum of planetary systems in the Galaxy. 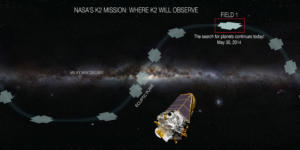 The Multiple Instrument Distributed Aperture Sensor (MIDAS) is a diffraction-limited, wide-field imaging spectrometer that utilizes distributed apertures and optical interferometer techniques to achieve simultaneous high spatial and spectral resolution. MIDAS prototypes were funded under the NASA High Capability Instrument Concepts and Technology (HCICT) program as a potential science payload for missions to the outer planets and their icy satellites. The high spatial resolution capabilities of MIDAS combined with nm spectral resolution will greatly advance our understanding of icy satellite surface composition in terms of minerals, organics, volatiles, and their mixtures. From 100 km mapping orbits, cm-scale imagery from MIDAS could revolutionize our understanding of the geology, dynamics, and history of icy moon surfaces. From higher orbits, MIDAS can engage in global, high resolution imaging spectroscopy with m-scale resolution for months at a time. Beyond traditional remote sensing, MIDAS is well suited to active techniques, including remote Raman, Fluorescence, and IR illumination investigations, in order to resolve surface composition and explore otherwise dim regions.

NASA’s second New Frontiers mission after New Horizons, was designed to study Jupiter from polar orbit around the gas giant planet. Its specific science goals include studying the planet’s composition, gravity field, magnetic field and polar magnetosphere, as well as investigating the nature of the planet’s core, the amount of water in its atmosphere, mass distribution, and the winds in its clouds.

Burkhard Militzer and his group develop interior models based on Juno’s measurements of the gravity field, while Cheng Li works with the microwave radiometer (MWR) instrument measurements to understand the composition temperature of the deep atmosphere. 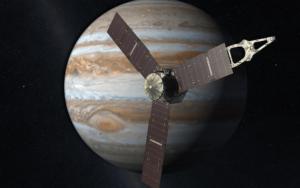